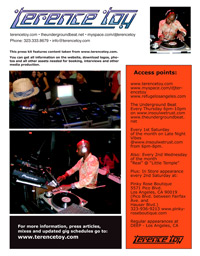 … to gain a good perspective of what he is about. Then contact us at press@terencetoy.com

The following are former press articles written about Terence Toy:

Terence Toy H2OUSE (Water Music Records)
Terence Toy, one of the originators of the house sound in Los Angeles, unleashes a great blend of some of today’s best offerings with this CD.With over 20 years behind the decks, it’s safe to say that Toy can teach us all a thing or two about what really makes a good mix. Inside H2ouse you’ll find a bit of soul, jazz, and even some gospel, intertwined with the forward-thinking production techniques of some of the USA’s best producers. Tracks like Finally by KOT and Mine to Give by Photek are obvious standouts, but the appeal of this release is the presence of some great records that are not so easy for the general public to find. Check it out for yourself. (Jon Wesley) –BPM Culture Magazine Issue 27 September 2001

If deep, soulful U.S. house is your thing then check out this album mixed by one of America’s finest West Coast DJs, Terence Toy. Take twelve tasty tracks by the likes of Kerri Chandler, Photek, Deep Swing & The Kings Of Tomorrow and build them into a progressive mix that grows from deep and jazzy up to good old funk. A former resident at “Release” S.F. and current resident at L.A.’s “Does Your Mama Know”, Toy has been a dedicated DJ for over twenty years and has the experience to support it. This smooth flowing mix will definitely get the waters flowing as one track morphs into the next. Sample this modern sound in its finest hour with one of the oldest swingers in
town. JD*8

Terence Toy
H2OUSE
(Water Music Records)
Well, I know this mix has already been out for a few weeks now but I barely got a chance to peep it out and was glad that I did. This mix by Terence Toy is definitely one to remember. Everything from the soothing intro that starts off with one of my favorites–– “Finally” by KOT–– to the more pumpin’ house towards the end, really makes this CD phenomenal. Out of all of Terence’s past mixes, I must say that I found this one to be the most moving for me. Jay ‘Idol’ Videna

Terence Toy is one of the originators of the House sound in Los Angeles and with twenty years of DJing experience he definitely deserves that title. On this new CD “h2ouse” he puts together elements that make up the true deep House sound. mixing a potent blend of Tribal,Jazz,Dub and Vocals from some of the best producers worldwide, it flows from beginning to end. With so much experience behind the turntables this CD is sure to intrigue the most jaded deep House fan. If you’re not familiar with what Deep House is, imagine softer House with soulful vocals thrown in here or there. If that doesn’t explain it-then check out this CD, it will.

BPM magazine said that Terence Toy’s recent mixed-track compilation, “h2ouse” (Water Music Records), covers the spectrum of House music, deep and jazzy to the purist of soul. Actually, that’s just scratching the surface. The disc is an unparalleled soundtrack of a colorblind, pansexual, groove-centric and classless underground dance culture, whose guest list will forever be hands off to the main stream. Toy (a resident jock at Tony Largo’s saturday night after-hours party “Does Your Momma Know?” at Coconut Teaser) has always been a staple of the local deep House scene. In addition to hosting “The Underground Beat” on 92.3FM and guest d.j. on “Powertools”/kprw Toy’s had residencies at the Probe, Circus, Paradise 24 and San Francisco’s “RELEASE”. The Jock runs his own label “HOUSE VIBES”, for years, distributing mixed-tape compilations for up-n-coming & established D.J.’s. Now he’s brought back his club “TOY BOX”, which used to rock the house at “The Pink” in Santa Monica. 8730 Sunset Bl. West Hollywood Every Tuesday $10.00 (310-859-5844) (Derrick Mathis)

Terence Toy wants to educate. A House DJ who entered into House through Jazz. Terence has a show on Los Angeles’ 92.3 The Beat from 1 to 2 A.M. Friday and Saturday nights. The show is called “The Underground Beat”, but Terence also thinks of it as The Education Beat. “The New Face Of Radio” he says, is House music. Maybe I’m dreaming….” A few years ago, Terence turned in a tape to another L.A. station, but found they were trying to steer him in a direction he was not interested in. “Basically, I was deviating from what I wanted to do. I wanted to be on radio to play House music. Michael Moore was in charge of a mix show at The Beat. He got hold of a tape and said ‘This is kind of what we want, but we want it more underground’, Terence laughs. “It’s been almost 2 years. It’s been a long journey”. The show started out as a mix show; no talking about the music, the DJs or where the music was coming from, or even what House music is and how many different there are. He then added sweepers; saying what the music was but not explaining it. But the music directors liked his voice (that voice; it has soul) and asked him to go live. Time to get someone on the air to talk about the music who knew about the music. Terence feels that his responsibility is to teach, and that he has been given the opportunity to be a professor of House on the air. His instructors? Ten City? Fingers Inc.,Liz Torres, Adeva, robert Owens, Martha Wash. (Those of you who live in L.A., class begins at 1a.m. friday nights). “I’m in love with being on the radio and teaching people…. I want to be influential in making the kids run out and but that album”. And the response? Moments like when an L.A. gang member took the time to call into the station to tell Terence how he didn’t think he was going to like it, but the show opened his eyes to it. “I’ll never quit radio”. The direction of the show sounds promising. A future goal is to expand to 4 hours a night of House. And in the near future there are plans to feature guests such as Tony Humphries, Joi Cardwell and Keoki. There is also the possibility of a tribute to the late David Cole of C&C Music Factory “In celebration of his life and his music” as well as a feature on Detroit Techno. Keoki? detroit Techno? On a House show hosted by a man who thinks of himself as Terence “JOUSE” Toy, the jouse being a fusion of Jazz and House? House music was made to unite all walks of people together.”he says. It’s all House, and the best description of it is soul; even the way into Techno is soul. “In the next 3 years I see a change back to dance music on the airwaves…and the topic I’m hosting every night is ‘SOUL”. I feel very proud that men and women around the world would go as far as to promote House music illegally if it’s needed. By any means necessary”.